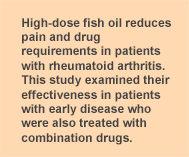 Use of fish oil to relieve the pain of rheumatoid arthritis goes back more than 25 years to the work of Kremer and colleagues. High-dose fish oil as an adjunct treatment in rheumatoid arthritis is under-appreciated, in part because its effectiveness is not widely known, doses of at least 2.7 g EPA + DHA per day are required and the lag time for detecting benefits can be 2 to 3 months. Further, standard practice guidelines for rheumatoid arthritis say little if anything about its use. Disease-modifying antirheumatic drugs (DMARD) continue to be the first line of therapy for early and established rheumatoid arthritis, with combination therapy implemented if disease activity remains high. The effectiveness of long-chain omega-3 PUFAs (n-3 LC-PUFAs) adjunct therapy for joint pain in rheumatoid arthritis was confirmed in a meta-analysis of 17 randomized trials of omega-3 PUFAs for joint pain, which concluded that these fatty acids significantly reduced patient-reported pain, minutes of morning stiffness, number of painful joints and consumption of non-steroidal anti-inflammatory drugs (NSAID). These fatty acids have well known anti-inflammatory effects and have been shown to inhibit the production of inflammatory mediators and boost the effectiveness of paracetamol (acetaminophen), a pain-reliever, in patients with rheumatoid arthritis. 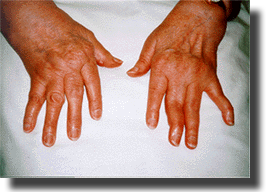 Investigators in Australia undertook a novel approach to studying fish oil in the treatment of 140 patients who were clinically diagnosed with rheumatoid arthritis of less than 12 months’ duration and had not taken DMARDs. Initiation of treatment early in the disease results in a long-lasting reduction of bone and joint damage. In this double-blind study, all patients were treated with a combination of DMARDs, methotrexate, (10 mg/week), folic acid (500 μg/day) sulphasalazine (500 mg/day, increasing over 4 weeks to 1 g/twice daily) and hydroxychloroquine (200 mg twice daily) and randomly allocated to consume either low- or high-dose fish oil. The high-dose fish oil contained 5.5 g/day of EPA + DHA and the low-dose 400 mg/day of EPA + DHA. The protocol for drug treatment used a treat-to-target approach based on a structured algorithm, which adjusted the drug doses according to the extent of disease activity rather than by predefined rules. The goal was low disease activity and complete disease remission on at least one occasion. The primary outcome was failure of triple DMARD therapy, defined as progression to leflunomide treatment. The investigators monitored the patients for 1 year. Patient withdrawals and one misdiagnosis resulted in 122 participants in the final analysis. Failure of triple DMARD therapy was significantly lower in patients consuming the high-dose fish oil (adjusted HR = 0.24; 95% CI, 0.10 – 0.54). Failure of triple DMARD therapy invoked leflunomide treatment and thence to biological agents. At the end of 1 year, only one participant (control group) was using a biological agent. Patients consuming the high-dose fish oil experienced a significantly shorter time to complete remission compared with the low-dose group (adjusted HR = 2.1; 95% CI, 1.0 – 4.3). Other assessments, including daily living activities scores, glucocorticoid use and methotrexate dose did not differ significantly between the groups. At baseline, 34% and 38% of the low- and high-dose groups, respectively, were taking NSAIDs and by 12 weeks, 44% and 72%, respectively, had discontinued taking them (P = 0.07). According to compliance estimates, those in the high-dose fish oil group consumed an average of 3.7 g of EPA + DHA per day, while controls consumed 0.36 g per day. Adverse or serious adverse events were more numerous among the high-dose participants, but the authors commented that none was plausibly linked to the fish oil.

These results provide striking evidence that successful treat-to-target triple DMARD therapy implemented at decreased intensity can be significantly enhanced by the addition of high-dose fish oil to the treatment of patients with early rheumatoid arthritis. The addition of 3.7 g/day of EPA + DHA resulted in approximately twice as many patients achieving complete disease remission in a year compared with patients consuming low-dose n-3 LC-PUFAs. Differences in remission were observed after about 6 months. Similarly, the need for leflunomide therapy was dramatically reduced by approximately 75% in the high-dose fish oil patients and the failure rate of triple DMARD therapy was significantly lower. The consumption of EPA + DHA by patients with rheumatoid arthritis may have additional benefits, including a reduction in cardiovascular risk factors and mortality. Patients with rheumatoid arthritis have a higher risk of cardiovascular disease and mortality. These patients also have poorer long-term outcomes following myocardial infarction, which would be expected to improve with the consumption of fish oil. The addition of fish oil to DMARD treatment reduced the failure rate of drug treatment alone without treatment-related adverse effects. In these free-living patients, high-dose EPA + DHA plus triple DMARD therapy achieved a high level of clinical effectiveness.   Proudman SM, James MJ, Spargo LD, Metcalf RG, Sullivan TR, Rischmueller M, Flabouris K, Wechalekar MD, Lee AT, Cleland LG. Fish oil in recent onset rheumatoid arthritis: a randomised, double-blind controlled trial within algorithm-based drug use. Ann Rheum Dis 2013; doi: 10.1136/annrheumdis-2013-204145. [PubMed]