Posted by pufa | April 29, 2015
Prenatal & Infant Health, Clinical Conditions
This article at a glance   Environmental enteropathy is a disease of infants and young children characterized by persistent subclinical damage of the intestine and immune activation that causes nutrient malabsorption and increased catabolism leading to retardation of growth and mental development. Environmental enteropathy is named as such since the enteropathy is caused by the specific adverse conditions of the physical environment of babies and young children. It was formerly called tropical enteropathy. The principal factors responsible for environmental enteropathy are exposure to drinking water and food contaminated with pathogenic microbes and parasites that are introduced into the diet upon weaning from breast milk. Conditions where fecal to oral contamination occurs prevail in many regions of the world where living conditions are very disadvantaged, and where proper “water, sanitation and hygiene” (WASH) conditions are absent. Effective interventions that can reduce the incidence of environmental enteropathy could benefit millions of infants and children, most of them in developing countries and rural areas.

Chronic environmental enteropathy is typically seen as atrophy and fusion of intestinal villi, augmented crypt cell growth, and inflammation of the sub-epithelial mucosa, dominated by T-cell infiltrates. It is now believed possible that even in the absence of clinically overt gut infections, exposure via various routes to an environment laden with fecal microbes is sufficient to sustain a chronic and systemic immune response activating catabolic processes that contribute to lower growth rates. Further factors contributing to environmental enteropathy may be the intake of food lacking specific nutrients that are important for the immune control of pathogenic microbes and parasites that trigger and maintain the damage and chronic inflammation of the intestinal mucosa, and impairs the capacity for the healing of intestinal lesions. The prevalence of undernutrition worldwide is of the order of 200 million children below five years of age. Although undernutrition has decreased in the past years, it is still responsible for more than three million child deaths each year. The effects of environmental enteropathy are sub-clinical, meaning that acute clinical symptoms are often not recognized. Environmental enteropathy as one cause of undernutrition is increasingly recognized to be responsible for interfering with normal infant growth, with a prevalence higher than chronic diarrhea or dietary inadequacy. A role for environmental enteropathy was initially uncovered in 1991 in a study of rural Gambian children, where the existence of long-term intestinal lesions was identified using a technique that measures gut epithelial permeability towards specific sugars that are differentially absorbed and excreted in the urine. Lactulose, a disaccharide that is not hydrolyzed in the gastro-intestinal tract, only enters the circulation when paracellular permeability is elevated, indicative of epithelial and mucosal damage. A second sugar, mannitol, is absorbed via a transcellular pathway relatively unaffected by the state of the small intestine, and is useful for normalizing lactulose uptake and urinary excretion. Upon oral challenge with lactulose and mannitol together, a diagnosis of non-specifically increased intestinal permeability due to enteropathy can be made from an elevated lactulose to mannitol ratio in urine. Besides improvements in WASH, which take time to build and maintain, there are no immediate ways to ameliorate environmental enteropathy. Several clinical trials with immunonutrients have been undertaken to improve immune status and augment the nutrient uptake of affected children, but these have not yet provided convincing results for improving intestinal integrity. Omega-3 long chain polyunsaturated fatty acids (omega-3 LCPUFA) activate multiple pathways that theoretically may offer improved resistance to environmental enteropathy, via strengthened immune responses to pathogens, anti-inflammatory effects that may lower systemic inflammation, and improved tissue healing of inflammatory lesions. Against this background, a recent intervention study has investigated the potential therapeutic value of EPA/DHA supplementation in lowering environmental enteropathy in 1-3 yr old children from a rural setting in Malawi. The research was carried out by Smith and colleagues from the Department of Pediatrics at Washington University, St. Louis, MO, USA, the University of Malawi at Blantyre, and colleagues from Cornell University, Ithaca, NY, and Baylor College of Medicine, Houston, TX. 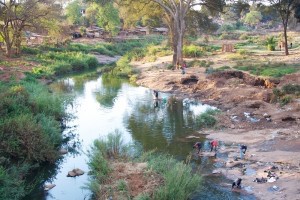 In this randomized double-blinded placebo-controlled clinical trial rural Malawian children aged 1-3 years were assigned to one of three intervention groups. The first group received a combination of multinutrients and 1 ml fish oil daily (n=79), the second group only multinutrient and a palm oil control (n=78), and the third group (n=73) received sugar and palm oil as control. The multinutrients were a mixture of vitamins and minerals, as recommended by the World Health Organization. Fish oil contained 325 mg EPA and 225 mg DHA per milliliter. Oils were given through a syringe by mouth, and multinutrients and sugar mixed with the food. Children were provided with the dietary intervention during 24 weeks, with assessments made prior to the start of the trial, at 12 weeks and at the end of the study. The primary outcome was enteropathy as measured with the lactulose:mannitol test. Additional outcomes that were monitored were the percentage of lactulose excreted, body length, and weight. Detailed anthropometric and demographic information was collected. The study made significant efforts to monitor compliance by trained nurses and health aides through taking reports from caregivers and by container inspections, during fortnightly scheduled home visits and refills, combined with unannounced home visits. No significant baseline differences in demographic and physical conditions of the children were present in the three study groups. The dual sugar absorption test results showed that baseline lactulose:mannitol ratio was elevated in all of the children, indicative of some degree of environmental enteropathy. Study compliance was very high, and significant increases in plasma levels of EPA and DHA, and red blood cell levels of EPA, were shown after 12 weeks. After 12 weeks of intervention a significant decrease in the lactulose:mannitol ratio was observed in the groups receiving multinutrients, and multinutrients plus fish oil. No significant decrease was observed in the control group compared to baseline. However, after 24 weeks no further improvements were noted in the treatment groups, and in the control group the enteropathy had improved to a similar degree as both treatment groups. The authors note that the study was underpowered to reliably detect the smaller than expected differences between groups. Assessment of dietary intake of several minerals and vitamins, protein fat and carbohydrate revealed sub-optimal intake of calcium, folate, niacin, retinol, vitamin B-12, and zinc among the study participants.