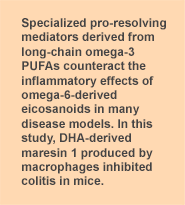 One of the most rapidly advancing areas of immune function research is the elucidation of a variety of anti-inflammatory, pro-resolving mediators derived from long-chain omega-3 PUFAs (n-3 LC-PUFAs), including EPA, DHA and n-3 DPA (docosapentaenoic acid) produced at the site of inflammation. To date, these substances include resolvins, protectins, maresins and most recently, pro-resolving mediators derived from n-3 DPA. Collectively, these mediators are known as specialized pro-resolving mediators (SPM). These substances counteract the inflammatory effects of arachidonic acid-derived eicosanoids, such as leukotriene B4 and prostaglandin E2. They halt the spread of inflammation by tempering leukocyte responses and limiting neutrophil recruitment, initiate the resolution of inflammatory responses and stimulate the clearance of cellular debris and bacteria from the site of inflammation. In addition to their involvement in atherosclerosis, one or more of these mediators has been shown to reduce inflammatory responses and promote the resolution of inflammation in animal models of ischemic stroke, periodontitis, acute lung injury, allergic airway inflammation, cigarette smoke-induced lung injury, inflammatory bowel disease and colitis, obesity-related inflammation, acute neuroinflammation, neuropathic pain following nerve trauma and others. In addition, these substances reduce the vascular smooth muscle cell responses following vascular injury, prevent bone loss and induce bone regeneration. It appears likely that these mediators are involved in the resolution of inflammatory responses wherever they occur in the body. 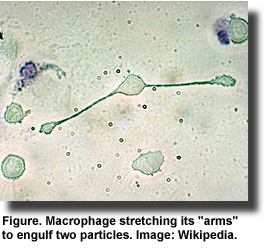 These SPMs are unique in their ability to initiate the resolution of inflammation and halt the spread of inflammatory responses. They are synthesized in various cells, including epithelial or endothelial cells in airways, retinal pigment epithelial cells, monocytes and leukocytes. To this list, add another source, macrophages, which synthesize maresins from DHA. Macrophages arise from the differentiation of monocytes and are specialized to engulf and digest cellular debris and pathogens. The potent anti-inflammatory activities of maresins have been demonstrated in cultured bronchial epithelial cells and slices of mouse lung exposed to hog dust extract, a powerful inflammatory stimulant. Maresin 1 was also reported to limit polymorphonuclear neutrophil infiltration in murine peritonitis and enhance the uptake of these cells by macrophages following apoptosis. In studies on tissue regeneration and pain, maresin 1 accelerated the regeneration of the head in the flatworm planaria, following surgery. Many members of this genus can regenerate lost body parts. In other experiments, maresin 1 reduced inflammation and neuropathic pain in mice exposed to chemotherapy. In this report, investigators in Santa Catarina, Brazil, examined the potential of maresin 1 to reduce inflammation and stimulate resolution in two mouse models of colitis. In humans, the incidence and prevalence of inflammatory bowel disease, which includes ulcerative colitis and Crohn’s disease, are increasing worldwide, according to a recent review. The investigators induced acute and chronic colitis following 3 protocols. Acute colitis was induced using the established model of dextran sulfate sodium (DSS) administered in the drinking water for 5 days, followed by 2 days of regular water. For chronic colitis, mice were given 2% DSS for 5 days, water for 10 days, then DSS for another 5 days, followed by 2 days of water. Maresin 1 was provided during all 7 days of acute colitis treatment and during the last 7 days of DSS and water administration for chronic colitis. An index of disease activity was compiled based on daily scores for weight loss, stool consistency and bleeding. 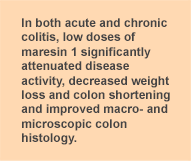 The study also assessed another model of colitis in mice fasted for 18 to 24 hours, anesthetized and given 2,4,6-trinitrobenzene sulfonic acid (TNBS) directly into the colon via a catheter. After 72 hours, the animals were sacrificed and the colons removed for histological analysis and indirect assessment of neutrophil infiltration into the tissue using the myeloperoxidase assay. Details of other assays and procedures are described in full in the paper. Five days’ treatment with DSS induced acute, severe, intestinal illness, observed as large changes in the disease activity index score (DSS ~11.5 vs control ~0.5), bloody diarrhea, marked weight loss (DSS ~25% loss vs no change in the control), and reduced colon length (DSS ~6 vs control ~10 cm). All differences were significant, P < 0.05. Treatment with maresin 1 throughout the 7-day period, at doses of 0.1, 0.3 or 1 μg/animal, resulted in significantly better scores with the two higher doses when compared with the DSS-only-treated animals. Scores for animals treated with 0.1 μg/animal did not differ from those given only DSS. The investigators also observed significant improvements with the two higher maresin doses in the macroscopic score, myeloperoxidase activity and microscopic score compared with the DSS-treated animals. In the model of chronic colitis, animals were treated with 2% DSS for the first 5 days, followed by 10 days without DSS, then DSS with 0.3 μg/animal of maresin 1 for another 5 days and 2 more days of maresin 1 only. After the first DSS treatment, the disease activity index rose to a peak mean of ~8.5 at day 8 and then fell to a mean of ~2.9 at day 14, remaining significantly above the untreated control. When the second 5-day treatment period began, one group of animals also received 0.3 μg/animal of maresin 1. At the end of the treatment period, animals not treated with maresin 1 had a mean disease activity score of ~7.2, while those given maresin 1 had a mean score of ~3.8, which was still significantly greater than the control, but significantly lower than the DSS-treated group. A similar pattern of results was observed in the mean body weights of the animals, except that the maresin 1-treated animals did not differ from the controls in mean body weight, but had significantly greater weights compared with the DSS-treated animals. Treatment with maresin 1 restored the colon length measurements, macroscopic and microscopic assessments to control values, significantly improved the severe mucosal inflammation and decreased the loss of epithelial cells. 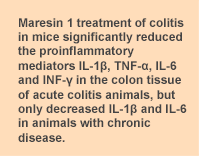 The researchers also measured proinflammatory mediators (IL-1β, TNF-α, IL-6 and INF-γ) in acute and chronic colitis tissue and found that pretreatment with maresin 1 resulted in significant decreases in all cytokines in the animals with acute colitis, but in chronic colitis, only IL-1β and IL-6 were reduced. The investigators examined neutrophil migration in both colitis models, using bone marrow-derived neutrophils isolated from femurs and tibias and measuring their movement across a polycarbonate membrane filter. Migration is a key step in neutrophil activity as the cells move from the blood to the site of inflammation. Maresin 1 alone did not induce neutrophil migration, but in the presence of a powerful chemoattractant that induces strong migration, maresin 1 reduced migration to approximately basal levels. Finally, in the model of colitis induced by TNBS delivered directly into the colon, simultaneous treatment with 0.3 μg maresin 1 per animal reduced the severity of weight loss nearly to control values by the third day (~4% wt loss vs ~1% wt gain in controls) and significantly reduced the macro- and microscopic tissue damage, restoring the histological features of the mucosa compared with animals given only TNBS. 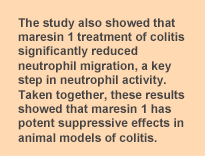