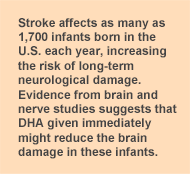 Less well known than adult strokes are those occurring in infants. They may affect up to 1,700 infants in the U.S. each year. Pediatric strokes are often related to changes in hemostasis in the mother or the placenta, particularly around the time of birth. An infant experiencing a stroke faces an increased risk of long-term neurological disability, particularly cerebral palsy. Faced with possible life-long neurological damage, infants could benefit considerably from interventions that limit the cellular and tissue damage from these strokes when they happen. A promising candidate for reducing brain damage and improving outcomes associated with ischemia, hypoxia and neuronal damage is DHA, a long-chain (LC) n-3 PUFA. Encouraging results with DHA or n-3 LC-PUFAs have been reported in animal models of traumatic brain injury, spinal cord injury and peripheral nerve damage. DHA or n-3 LC-PUFAs have also been associated with significantly reduced axonal damage after head injury and with reduced inflammation following spinal cord injury. In animal models of stroke, DHA complexed to albumin has also been associated with neuroprotective benefits when administered up to 7 hours after the onset of stroke. Lipid mediators derived from DHA, such as neuroprotectin D1, have also been reported to promote cell survival and sustain homeostasis in brain injury. These studies and others suggest that DHA might limit the damage from stroke and promote cell survival in pediatric patients. With the goal of curbing cerebral damage, investigators at Columbia University, New York, and at several pediatric and neuroscience research centers in the U.S. collaborated to study the effect of administering DHA-containing triglycerides to neonatal mice with hypoxia/ischemia brain injury. This animal model has been well characterized and used as a model for human neonatal hypoxia/ischemia brain injury. The investigators assessed the effects of triglyceride emulsions containing 55% linoleic acid from soybean oil, n-3 LC-PUFAs (~58% EPA plus DHA) from fish oil, or those with either >99% pure DHA or EPA prepared in the laboratory. The pure EPA and DHA emulsions were similar in size to VLDL particles. Ten-day-old neonatal mice underwent cerebral ischemia by ligation of the right common carotid artery, followed by 1.5 hours of recovery with their dams. At that time, the animals were exposed to systemic hypoxia for 15 min in a hypoxic chamber containing 8% humidified oxygen. Twenty-four hours after reperfusion the animals were sacrificed and their brains removed for evaluation. Treatment with the n-3 fish oil or n-6 emulsion was given to groups of mice by intraperitoneal injection immediately after surgery and again at the end of the hypoxic exposure. Other groups of animals were treated post-operatively after exposure to hypoxia and again 1 hour after reperfusion. Delayed treatments were evaluated in yet other animals, with the first dose given 1, 2 or 4 hours after hypoxia and then again one hour after the first dose. Brain damage was evaluated after injury by measuring cerebral blood flow using laser Doppler flowmetry and assessing the size of tissue loss in 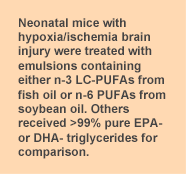 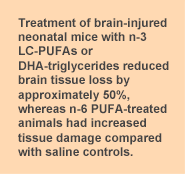 To learn whether the administration of DHA-triglyceride provided long-term neuroprotection, the investigators examined the brain tissue of DHA-triglyceride-treated injured animals 8 weeks after injury. They treated the animals with 0.375 g/kg body wt of DHA-triglyceride immediately after hypoxia/ischemia injury and one hour later. Tissue loss in the saline-treated controls was 25.0 ± 2.4% compared with 15.0 ± 2.5% in the DHA-triglyceride-treated animals (P = 0.02). Thus, a significant level of tissue protection was sustained 2 months after the hypoxia/ischemia injury. These studies demonstrated a significant reduction in brain tissue loss and infarct size from hypoxia/ischemia injury in neonatal mice treated with triglyceride emulsions containing n-3 LC-PUFAs, or pure DHA. EPA did not affect the amount of brain injury, while n-6 PUFAs increased the extent of tissue damage. DHA-triglyceride treatment led to reduced tissue loss when given up to 2 hours after injury, but not when delayed for 4 hours. Measurement of plasma triglyceride concentrations after injury showed a maximum increase 1.5 hours after the dose and a return to baseline levels by 3 hours, consistent with the pattern of n-3 LC-PUFA neuroprotection. Other investigators have reported that pretreatment with DHA prior to ischemic injury was associated with reduced brain infarction, inflammatory cell infiltration and other neuroprotective effects in neonatal and adult animals. The reduction in tissue damage was sustained at 8 weeks after the injury, when the DHA-triglyceride was given in 2 treatments immediately after injury. On the basis of preliminary unpublished studies in adult mice and results in a slightly different stroke model in rats, the investigators suggested that the effectiveness of DHA-triglyceride could be related to the production of neuroprotectin D1 (NPD1) from DHA. Studies have reported that NPD1 reduces inflammation, promotes the resolution of inflammatory responses, enhances cell survival, reduces apoptosis, protects synapses and signaling pathways and is involved in many activities that protect neurons and brain tissue from injury. 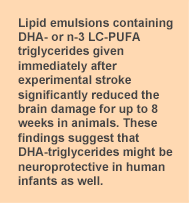