Posted by pufa | August 28, 2012
Cardiovascular Health
Relationships between the pattern and size of circulating lipoproteins and cardiovascular disease have been extensively studied, with high concentrations of low-density lipoprotein-cholesterol (LDL-C) and high-density lipoprotein-cholesterol (HDL-C) particles associated with higher and lower disease risk, respectively. Recently, the effectiveness of various interventions to raise HDL-cholesterol levels has been questioned as a result of disappointing trial results. 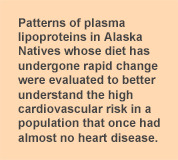 Dietary intakes of different fatty acid classes, PUFAs and carbohydrates affect the amounts, size and distribution of lipoprotein particles and contribute to changes in the risk of cardiovascular disease. For example, high intakes of omega-6 PUFAs are associated with reductions in LDL-C, while consumption of the long-chain omega-3 PUFAs (n-3 LC-PUFAs) DHA and EPA associates with lower triglycerides and sometimes higher HDL-C, with modest increases in LDL-C. A recent review discussed the effects of EPA and DHA together or separately on LDL-C and other lipids. It is also established that high intakes of carbohydrates are linked to smaller LDL particle size or increased particle density, as also observed in type 2 diabetes. This article describes findings from the ongoing study of the Genetics of Coronary Artery Disease in Alaska Natives (GOCADAN) study. The population is unique in several ways because it has undergone rapid and dramatic dietary and lifestyle changes and experienced soaring rates of cardiovascular disease and diabetes. Formerly, these diseases were infrequent, in spite of high intakes of n-3 LC-PUFAs, high HDL-C and normal LDL-C levels. This report examines the lipoprotein distributions and particle sizes in residents of 8 villages in the Norton Sound Region of Alaska who were 17 to 91 years of age at enrolment. The sample of 977 participants comprised 74% of all age-eligible residents. Those with diabetes or taking hypolipidemic agents were excluded. Dietary intakes were assessed by a 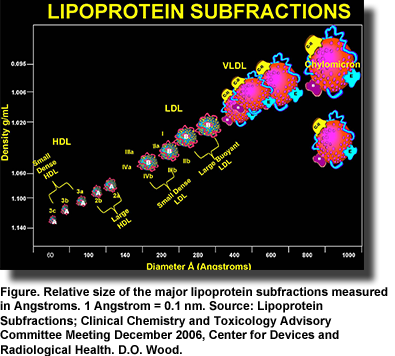 food frequency questionnaire previously developed and validated for the region. Assessment included all major traditional and key foods available in small village stores. Fasting blood samples were obtained at baseline for lipid analysis and lipoprotein subclassification in plasma. Lipoprotein subfractions were analyzed by NMR spectroscopy as described in detail in the paper. Nomenclature for different lipoprotein subfractions differs with the analytical methodology, as illustrated and compared in a presentation by Wood (Figure). The distribution of lipoprotein fractions differed between sexes with women having lower total VLDL and LDL particles and higher concentrations of total and large HDL. For LDL, women had significantly fewer small particles, but higher concentrations of larger ones. The values are summarized in Table 1. 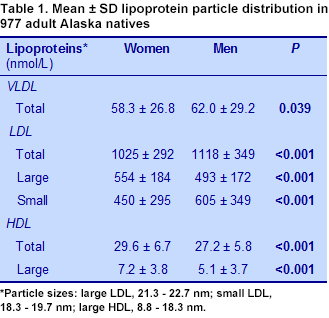 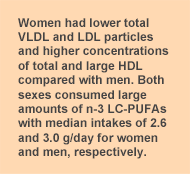 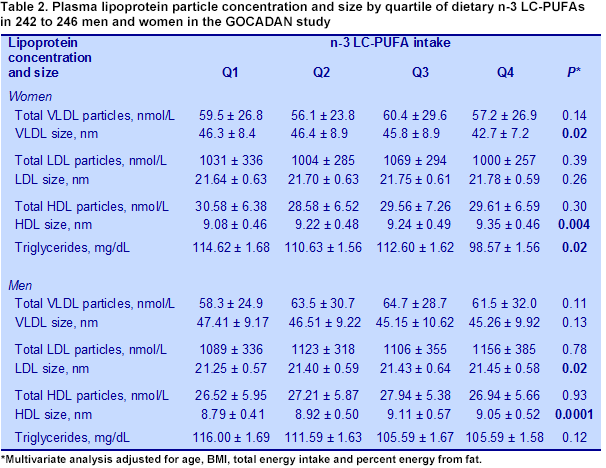 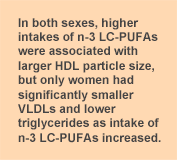 The authors suggested that the decrease in the number of large VLDL particles and smaller average VLDL particle size with increasing n-3 LC-PUFA intakes might reflect greater catabolism of VLDL and thus, lower triglyceride concentrations. Increased availability of triglycerides, which exchange with HDL, would contribute to the increase in large HDL particles observed in men and the increase in average HDL particle size seen in both sexes. Large HDL particles are considered less atherogenic than small ones. However, several investigators have emphasized the importance of HDL functionality, i.e., its ability to promote reverse cholesterol transport from the periphery and its anti-inflammatory effects, in addition to the levels of HDL-C. A further caution about efforts to raise HDL-C levels as a way to reduce the risk of cardiovascular disease is the premature cessation of a recent clinical trial due to futility. The interpretation of the association between higher n-3 LC-PUFA intakes and larger average LDL particle size in men warrants care. Higher LDL-C and total LDL particle concentration were linked to greater carotid intima media thickness in an earlier report from this study. That study also reported a significant association between larger LDL size and plaque. The complex interactions among lipoprotein classes and subclasses make it difficult to interpret the true effects of high intakes of n-3 LC-PUFAs in this and other populations. In these Alaska natives, the protective associations usually observed with high intakes of n-3 LC-PUFAs and cardiovascular disease appear to be undermined by the adoption of an unhealthy diet. Annuzzi G, Rivellese AA, Wang H, Patti L, Vaccaro O, Riccardi G, Ebbesson SO, Comuzzie AG, Umans JG, Howard BV. Lipoprotein subfractions and dietary intake of n-3 fatty acid: the Genetics of Coronary Artery Disease in Alaska Natives study. Am J Clin Nutr 2012;95:1315-1322. [PubMed] Worth Noting Jacobson TA, Glickstein SB, Rowe JD, Soni PN. Effects of eicosapentaenoic acid and docosahexaenoic acid on low-density lipoprotein cholesterol and other lipids: a review. J Clin Lipidol 2012;6:5-18. [PubMed]