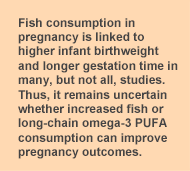 Fish and shellfish consumption during pregnancy provides the fetus with several nutrients that may be scarce in maternal diets, such as selenium and long-chain omega-3 PUFAs (n-3 LC-PUFAs), which are essential for optimum brain growth and function. Some, but not all, prospective cohort studies have reported that mothers who consume seafood during pregnancy may deliver infants of higher birthweight. Some intervention studies with n-3 LC-PUFAs have reported higher birthweights among supplemented women, especially where maternal intakes of n-3 LC-PUFAs have been very low. However, many studies have observed little or no effect of additional n-3 LC-PUFA consumption on birthweight. Low seafood consumption has been linked to a greater risk of preterm delivery and low birthweight. Some studies reported a significantly lower risk of preterm birth among women with higher intakes of n-3 LC-PUFAs, particularly for very early delivery among high-risk women, although reports are inconsistent. A meta-analysis of supplementation among low-risk women suggested that the effect of n-3 LC-PUFA supplementation during pregnancy was small. A more recent meta-analysis of 3 randomized controlled trials of n-3 LC-PUFA supplementation in pregnancy reported that supplemented women had a 40% lower risk of delivering before 37 weeks’ gestation (P<0.05) compared with unsupplemented mothers. Their infants weighed 71 g more (P<0.05) than the offspring of unsupplemented women and had a significantly higher gestational age of 4.5 days. Considering the multiple health risks confronting preterm infants, especially those born before 34 weeks’ gestation, effective measures to reduce the risk of preterm birth could have large and positive effects on infant health. For this reason, resolution of the discrepancies in the data on maternal n-3 LC-PUFA status during pregnancy is important. 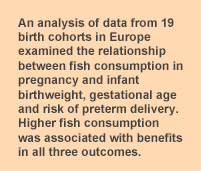 A new report based on pooled and harmonized findings from 19 European birth cohort studies (12 countries) involving 151,880 mother-child pairs from the general population is a welcome addition to the literature on fish intake during pregnancy and infant growth outcomes. Eligible studies provided data on maternal fish intake during pregnancy, birthweight and gestational age for births between 1996 and 2011. Data included only singleton, live births. Frequency of fish consumption was grouped into three categories, ≤1 time per week, >1 but <3 times per week and ≥3 times per week, based on tertiles of fish intake from food frequency questionnaires. Six cohorts had at least one category with <5% of participants that did not fit these categories and were excluded. Gestational age was estimated as the interval between the last menstrual period and delivery (72%), by ultrasound estimation (21%) or absent this information, from obstetrician estimation (7%). Birthweights were defined as small-for-gestational-age if they were below the 10th percentile for the cohort-specific growth curves, stratified by gestational length and sex. Low birthweight was defined as <2,500 g and high birthweight as >4,000 g. Preterm was considered to be delivery before 37 weeks’ gestation. The statistical analysis was performed first by cohorts and second for cohort-specific effects using random- and fixed-effects meta-analysis. Adjustment for confounding variables determined a priori included maternal age at delivery, height, prepregnancy BMI, education, smoking during pregnancy, parity and infant sex. For three cohorts, analyses excluded adjustment for maternal age, education, prepregnancy BMI or parity when data were lacking. A summary of the main outcome variables across the 19 cohorts is presented in Table 1. 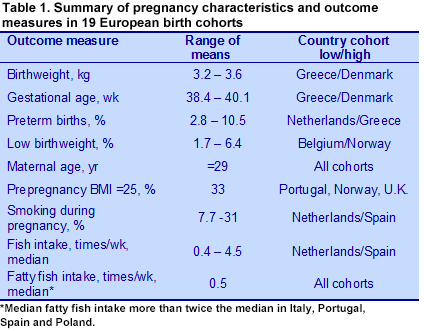 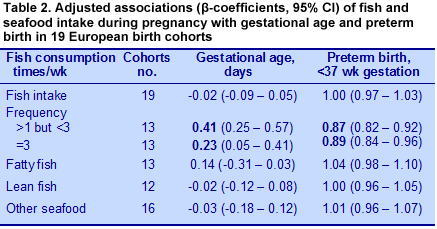 Overall, the rate of preterm births was relatively low (2.8 to 10.5%) compared to the rate of 12% in the U.S. in 2010, where ethnic diversity may be greater. The U.S. rate represents a 30% increase from the rate of preterm births observed from 1981 to 2006, indicating that the risk of preterm birth continues to be a substantial, possibly growing, public health challenge. The investigators also observed increased birthweight (~40 g) in infants born to mothers who smoked during pregnancy when mothers with the greatest fish consumption (≥3 times per week) were compared with mothers who ate fish ≤1 times per week. A similar, but less marked, difference (10 g) was observed among non-smoking mothers. Smoking is associated with significantly lower birthweight and gestational age. The possibility that higher fish consumption may lower these risks is an encouraging prospect. By com