Posted by pufa | September 30, 2016
Visual Function
This article at a glance

The photoreceptor cell is a neuronal cell type specialized in sensing light and transducing photons into electrical signals. Photoreceptor cells form the sensory part of the retina, capturing photons in rod photoreceptors to allow dim light vision (monochromatic vision in the dark), in cone photoreceptor cells that measure color, and photosensitive retinal ganglion cells that are involved in diurnal regulation and initiate the pupillary reflex response to incident light. Phototransduction by photoreceptor cells allows our brain to construct a visual image of our surroundings, an ability that is vital for survival of the human organism as a whole. The retina is characterized by an immune privileged status to avoid that immune cell infiltration disturbs the physical configuration and cellular health of the photosensitive retinal tissue. Docosahexaenoic acid (DHA) plays a central structural and functional role in both the sensory function of the photoreceptor cell as well as in mechanisms that protect retinal tissue from being damaged. 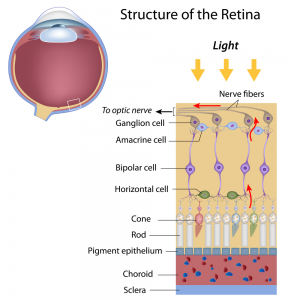 The stacked membranes in the outer segments of rods that hold the light-sensitive opsin proteins are composed of phospholipids containing very high levels of DHA. DHA-containing lipids physically interact with rhodopsin, the opsin of rod photoreceptors, to allow proper phototransduction. Sufficient dietary DHA intake, along with the macular pigments lutein and zeaxanthin, is required to maintain the sensitivity and recovery of photoreceptor rods. The high concentrations of polyenic fatty acids together with the exposition to light make the retina a tissue that is also sensitive to photo-oxidation. To sustain lifelong functioning, the retina is endowed with a sophisticated mechanism of protection from tissue damage that may ensue from photo-oxidation. Unique carotenoids, such as lutein, zeaxanthin and meso-zeaxanthin, divert free electron radical species that may form within photoreceptor membranes. During outer segment turnover by retinal pigment epithelial (RPE) cells, necessary for the recycling of bleached retinal photopigment, DHA is released from phagocytosed membranes to activate cytoprotective mechanisms that protect the photoreceptor from oxidative damage and cell death, while maintaining inflammatory responses at bay. This is achieved by activation of gene transcription of tissue protective proteins by DHA itself, as well as via the enzymatic oxygenation of DHA to the docosanoid neuroprotectin D1, which activates pro-survival signaling in the face of increased oxidative stress and outer segment turnover.

During early post-natal development, the large demand for DHA by photoreceptor cells is covered by DHA synthesized from alpha-linolenic acid (ALA) in the liver, as well as preformed DHA obtained from breast milk and carried via lipoprotein-mediated transport to the developing retina. RPE cells have recently been shown to express the Mfsd2a transporter that takes up DHA-containing lysophosphatidyl-choline (lysoPC), which may be derived from the circulation. The maintenance of photoreceptor DHA levels is furthermore supported by cell types in close proximity to the photoreceptor cells. RPE cells not only play an important role in recycling the active opsin pigment, 11-cis-retinal, back to photoreceptor cells, but they can also synthesize DHA from precursor fatty acids such as ALA and docosapentaenoic acid (ω-3). Likewise, microvascular endothelial cells in the retina have this biosynthetic capacity. In other words, various cell types in retinal and choroidal tissue may contribute to form DHA locally and supply this fatty acid to photoreceptor cells. Furthermore, RPE cells actively phagocytose membrane fragments from the outer photoreceptor segment, and shuttle DHA-containing phospholipids back to the inner segment, thereby contributing to the active concentration of DHA within photoreceptor cells. 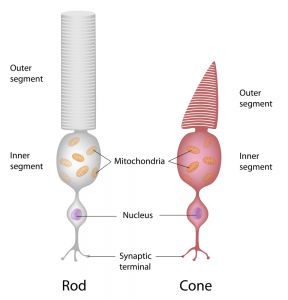 Compared to DHA, which makes up over half of all fatty acids esterified in phospholipids of the outer segments of photoreceptor cells, EPA is present in very low amounts. Interestingly, EPA can be converted rapidly into DHA when administered intravitreally. Other metabolic precursors of DHA can also be actively transformed into DHA when added to mixtures of retinal cells. Both EPA and DHA levels in serum are associated with lower risks of certain retinopathies, but how EPA derived from the circulation contributes to retinal health and function is unclear. Various omega-3 polyunsaturated fatty acids can clearly serve as metabolic precursors for DHA formation within the retina, but it has not been specifically addressed if neural cells of the retina may be capable of DHA synthesis from EPA. A recent study by Simón and colleagues from the Bahía Blanca Institute of Biochemical Investigations (INIBIBB), at the Universidad Nacional del Sur-CONICET, in Buenos Aires, Argentina, together with colleagues at the University of Oklahoma, OK, USA, addressed if EPA is able, just like DHA, to promote the survival and differentiation of photoreceptor cells, and if these cells could synthesize DHA using EPA as a biosynthetic precursor. The researchers made use of primary cultures of pure retinal photoreceptor neuronal cells isolated from rat retinas. Retinal cells were obtained from the retinas of 2-day old rat pups, and placed in cell culture conditions that give rise to pure neuronal cultures, composed mainly of photoreceptor cells and amacrine cells (retinal interneurons). Under these conditions, the photoreceptor cells start dying spontaneously after several days in culture by apoptosis, but supplementation with a low concentration of DHA can selectively inhibit this process and stimulates differentiation into photoreceptor cells, with the formation of new apical processes, an increased expression of opsin, and the localization and concentrating of opsin in the apical processes of the cells. The researchers first showed that, similar to the effect of DHA, the addition of low concentrations of EPA (3 µM) protected the retinal neurons from apoptosis induced by oxidative stress (experimentally generated by the redox cycling agent paraquat, or by hydrogen peroxide). Cells received EPA two days before exposure to oxidative stress, and were followed for another day. Mitochondrial membrane potential, a measure of the capacity of the mitochondria to generate ATP and energy, was also maintained by EPA. None of the other fatty acids that are present in reasonable levels in the retina, palmitic acid, oleic acid and arachidonic acid, shared the cytoprotective activity of EPA and DHA. Exposure of retinal neurons to EPA also stimulated further differentiation into photoreceptor neurons with the expression of opsin, and the formation of apical processes with an intense opsin labeling. These effects were accompanied by a marked increase in DHA levels in cellular lipids. Esterified EPA levels did not increase, indicating that all of the EPA was directly converted to longer chain metabolites en route to DHA. In order to synthesize DHA from EPA, a desaturation reaction catalyzed by the fatty acid desaturase FADS2 is required as one of the biosynthetic steps. Indeed, the neuronal cells expressed FADS2, independent from being exposed to EPA or not. Using an inhibitor (CP-24879) of both Δ-5 and Δ-6 fatty acid desaturases the increase in DHA formation from EPA was abolished. Interestingly, the antiapoptotic effect and the cell differentiation induced by EPA were abolished by blocking DHA synthesis. These results suggest that retina neuronal cells are capable of using EPA to form DHA. Furthermore, this ability allows the use of EPA to support a cytoprotective function in retinal neurons, and aids in the differentiation of photoreceptor cells, at least under cell culture conditions. This study is the first to indicate that not only DHA, but also EPA, may directly support the synthesis of DHA in retinal neurons to serve photoreceptor function.