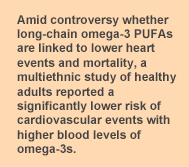 Recent clinical trials have reported no additional benefit on the risk of cardiovascular mortality or morbidity from the consumption of long-chain omega-3 PUFAs (n-3 LC-PUFAs), mainly EPA and DHA, which are found in fish and fish oil, krill or algal supplements. These studies have mainly been conducted in patients with multiple cardiovascular health risks who were receiving statins and other state-of-the-art medical care. Under such circumstances, it becomes more difficult to demonstrate additional clinical benefit from small amounts of n-3 LC-PUFAs. The catch is, not all patients at risk of heart disease receive state-of-the-art medical care and may require larger amounts of n-3 LC-PUFAs to reduce their cardiovascular risks. In patients not receiving statins, the effect of n-3 LC-PUFA supplementation was associated with a 50% lower risk of major cardiovascular events. For these reasons and others, information from large observational studies in heterogeneous populations about the relationship between PUFA status and the risk of cardiovascular events (e.g., myocardial infarction, death from heart disease, stroke) is useful. It is even better when such studies examine tissue PUFA concentrations rather than dietary consumption estimates, which are prone to substantial measurement error. Results from a study of 2,837 adults of multiethnic descent (Caucasian, African American, Hispanic and Chinese American) living in the U.S. whose health was monitored for up to 10 years have just been published and are described in this article. Participants in the study ranged from 45 to 84 years of age and were free of clinical cardiovascular disease at enrollment. On average, participants were 62 years of age. The investigators assessed participants’ health status every 2 years and obtained fasting blood for plasma phospholipid fatty acid analysis at baseline. They also assessed dietary intake using a food frequency questionnaire. After excluding those who consumed fish oil supplements, there were 2,372 participants. Not surprisingly in a U.S. population sample, seafood and n-3 LC-PUFA intakes were low, with the average daily intake of EPA, DPA and DHA amounting to 147 mg/day. However, consumption of these n-3 LC-PUFAs ranged between 103 and 203 mg/day between the lowest and highest quartiles, whereas linoleic acid (n-6) intakes were reciprocal, ranging between 10.5 and 7.9 g/day in these quartiles. In this cohort, approximately 16% of participants were taking lipid-lowering medications. Circulating levels of EPA and DHA were inversely associated with a lower risk of cardiovascular incidence. Hazard ratios for the highest quartiles of EPA and DHA were 0.49 (95% CI, 0.30 – 0.79) and 0.39 (95% CI, 0.22 – 0.67), respectively. These hazard ratios are equivalent to risk reductions of 51 and 61%, respectively. There were no significant associations between plasma phospholipid measures of alpha-linolenic acid or arachidonic acid and incident cardiovascular disease. There was, however, a trend toward higher risk of cardiovascular disease with greater concentrations of linoleic acid, but the trend did not reach statistical significance (P = 0.08). Similar results were observed for the risk of coronary heart disease incidence, with significant risk reductions with phospholipid levels of EPA, DHA and total n-3 LC-PUFAs, but there were no associations with alpha-linolenic acid or linoleic acid.

Higher phospholipid levels of these n-3 LC-PUFAs were also associated with significant reductions in the inflammatory mediators, IL-6 and receptor-1 for TNF-α, but not with CRP. EPA, DHA and total n-3 LC-PUFAs were not significantly associated with lower triglyceride levels, but EPA and total n-3 LC-PUFAs were related to small but significant increases in low-density lipoprotein-cholesterol levels. Phospholipid alpha-linolenic acid levels were not associated with risk of cardiovascular or coronary heart diseases. Higher levels were inversely related to CRP levels, but not to other inflammatory markers measured. These data confirm numerous previous studies in which higher tissue levels of n-3 LC-PUFAs were associated with significantly lower risks of cardiovascular and coronary heart disease and mortality in the general population not taking statins. Their association with significantly lower levels of inflammatory biomarkers confirms previous reports of the anti-inflammatory effects of n-3 LC-PUFA in patients with cardiovascular disease. Inflammation is widely recognized as an important factor in cardiovascular disease and the ability of n-3 LC-PUFAs to reduce inflammatory mediators and resolve inflammatory responses suggests additional advantages of these PUFAs for treating atherosclerosis and cardiovascular disease. This study extends the observations on the protective effects of higher blood levels of n-3 LC-PUFAs on cardiovascular and coronary heart disease events to span diverse race and ethnic groups with relatively low intakes of seafood and n-3 LC-PUFAs. It also confirms the weak associations with alpha-linolenic acid and heart disease mortality and, interestingly, reported no risk reduction with circulating or dietary intakes of linoleic acid. Thus, continued controversy is assured. de Oliveira Otto MC, Wu JH, Baylin A, Vaidya D, Rich SS, Tsai MY, Jacobs DR Jr, Mozaffarian D. Circulating and dietary omega-3 and omega-6 polyunsaturated fatty acids and incidence of CVD in the Multi-Ethnic Study of Atherosclerosis. J Am Heart Assoc 2013;2:e000606. [PubMed] Open Access