Posted by pufa | September 30, 2016
Prenatal & Infant Health, Guest Articles & Invited Opinions
Thomas Brenna Division of Nutritional Sciences Cornell University Ithaca, NY 14853 USA jtb4@cornell.edu / 607-255-9182   The long chain polyunsaturated fatty acids (LC-PUFA) docosahexaenoic acid (DHA) and arachidonic acid (AA, or ARA) are conserved components of the breast milks of all well-nourished mothers worldwide. Since at least the mid-1990s, they have been permitted as components of infant formulas in Europe, and since 2001 in the USA. Prior to about 1990, the safest sources of fats for infant formulas were vegetable oils with no LCPUFA, or dairy fat with negligible DHA. Concerns over the ability of infants, and particularly preterm infants, to endogenously biosynthesize all LCPUFA needed to supply the rapidly growing brain surfaced around 1990 and were directly primarily to DHA. Since then, research has focused very much on DHA and not on ARA. However, the science undergirding the need for ARA has come into focus recently as a result of the European Food Safety Authority (EFSA) implicit assertion that ARA is an optional nutrient for the term infant even when docosahexaenoic acid (DHA) is present [1]. Following this advice, manufacturers would be permitted to make infant formulas that have DHA but no ARA. The action has been challenged by some researchers [2], including me, as without firm basis clinically or pre-clinically [3, 4].

What is a required nutrient? Establishing nutrient requirements has evolved from a century ago in the era of vitamin discovery to modern times. Early on, animal experiments were the leading guide to nutrient deficiency symptoms, suggesting human studies which identified acute deficiency symptoms and in some cases attempting to recapitulate symptoms experimentally. For more than 20 years, the nutrition research community’s understanding of “requirement” now extends to chronic conditions, as in the case of cardiovascular disease and, importantly, to acute symptoms that are detectable only with specialized tests. Clinical studies go hand in hand with animal studies because the former are highly restricted in the control and sampling that can be exerted, and the latter are inherently imperfect models for humans. Indeed, in formal settings, animal studies are not considered evidence in the sense of evidence-based medicine, a swing of the pendulum too far for comfort in my opinion [5]. Regardless, all can agree that for maximal confidence, clinical evidence developed in a sampling of the relevant population and indications, with relevant comparator (controls), and looking at relevant outcomes, is needed. 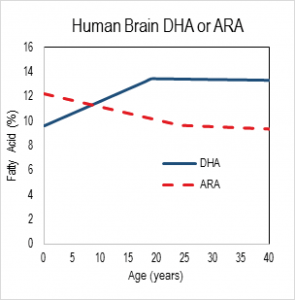 Nutrition in development The relevance of DHA nutrition to infant development is suggested by DHA accretion during the human brain growth spurt, when the brain increases size dramatically from about 27 weeks of gestation to 2 years of life [6]. The brain is uniquely rich in DHA, and its increase in size implies an unusually high demand for DHA. DHA continues to accumulate to about 18 years of age where it levels off until about 90 years, as shown in the nearby chart drawn from data from a cross-sectional autopsy study [7]. Less remembered is that at birth, ARA is at substantially greater concentration in the brain than DHA. ARA concentrations remain high, though unlike DHA, they gently drop in childhood. Direct Clinical Evidence What is the clinical evidence that DHA alone without ARA is safe? The universally agreed upon optimal food for infants is breast milk. Simply put, data from studies around the world show that breast milk conserves ARA concentrations. The amount of ARA in breast milks across the globe appears in a tight window of about 0.47% ± 0.13%, compared to DHA (0.32% ± 0.22%) [8]. Both of these LCPUFA are major structural components of all neural tissue in all mammalian species, and perinatal metabolic deficiency of either causes acute deficiency symptoms. On this basis, the default assumption should be that they are required components of formulas requiring compelling evidence that they can be omitted. Moreover, the underlying biochemical shows that they interact with one another, one inhibiting the other’s access to enzymes and with them, synthesis of signaling molecules. Unfortunately, convenience in specifying individual nutrient levels for legal clarity often omits the known relationships between nutrients, thereby oversimplifying the basic biology. In the case of DHA and ARA, some regulations require ARA and DHA proportions in a specific range, while others state minimal levels of each without regard to the other. Dozens of clinical trials have been conducted, starting in the 1990s, of LCPUFA formulas compared to formulas that have only omega-6 linoleic acid and omega-3 alpha-linolenic acid as precursors for the LCPUFA. Most of these trials have two characteristics in common: 1) the “LCPUFA” group has both DHA and ARA; 2) the outcomes are neural in nature, typically visual or cognitive, apart from general “failure to thrive” indexes, particularly weight [9-14]. Studies with formulas that include DHA with and without EPA have been conducted. No studies have been reported that use ARA alone in a formula, and it is unlikely that one will be conducted in normal infants in the foreseeable future because of concerns over acute effects of ARA, e.g. in clotting or inflammatory response. A proper clinical study design for establishing need for ARA in the presence of DHA would be RCTs that include treatment arms with DHA only and with DHA and ARA (DHA+ARA), and measuring a functional endpoint that is likely to be limited by ARA intake, for instance vascular or immune outcomes. In fact, only three cohorts of human infants, all apparently healthy full term infants, have ever been studied: the Retina Foundation of the Southwest study [15-18], the Adelaide study [19, 20], and the Ross Pediatric Research Study [21-23]. None of them considered endpoints characteristic of ARA. Growth was considered as an ARA endpoint, for which some early evidence was presented in preterms [24]; growth measured by weight gain is not a general characteristic of ARA and data obtained since that pioneering early work has obviated concerns [25, 26]. Considering these studies together [3], one of three trials, the Retina Foundation trial with the highest ARA and among the two with adequate DHA (Ross used low DHA), found significant effects on neural outcomes for DHA+ARA compared to DHA only. These experimental studies of ARA provide scant evidence to delete ARA from the diets of infants when they are consuming DHA, and on the contrary suggest it may be important even to DHA-dominated outcomes. Indeed, a recent study of very preterm infants (<1500 g and/or 32 weeks gestation at birth) comparing two levels of ARA with constant DHA showed that infants consuming formulas with greater ARA (2 fold) had better psychomotor development at two years of age, as well as significantly greater plasma ARA [27]. As a general matter, the weight of existing clinical evidence favors ARA inclusion with DHA and not the other way round. Preclinical/Basic science From the preclinical perspective, nutritional sources of ARA and DHA behave differently. In LCPUFA-free diets, all ARA and DHA must be obtained from biosynthesis in the body, via biochemical pathways that interact in the most intimate of ways. The very same endogenous enzymes mediate the conversion of 18 carbon omega-6 linoleic acid (LA) to ARA and 18 carbon alpha- 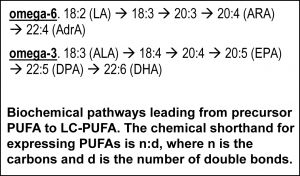 linolenic acid (ALA) to EPA and DHA (see box nearby). The structural difference in the omega-6 and omega-3 PUFA is subtle, only one double bond, and explains why they have common pathways. All these fatty acids and others interact to modulate tissue levels of fatty acids. This observation is the reason that the “ratio” of omega-6 to omega-3, or better, LA to ALA, is a key nutritional factor defining tissue composition. The pathway also shows that ARA is an intermediate for the formation of adrenic acid (AdrA), which also accumulates in the brain albeit at lower levels than ARA and DHA. The precise role of AdrA is not known but it also is structurally similar to DHA, and rises when DHA is low, implying that it may have some common functions. In industrialized diets, the 20th century emphasis on PUFA for control of serum cholesterol led to an excess of omega-6 LA and relatively low omega-3 ALA [28]. In part as a result, diets are replete with omega-6, while DHA is suppressed. Data from animal studies controlled far more precisely than any human study can be controlled demonstrate these effects are highly reproducible [29] and have consequences for functional endpoints, especially neural function [5]. Neural DHA levels are highly dependent on diet DHA levels, while ARA levels are much less so [30]. This does not mean, however, that ARA metabolism is not affected, or that its role as a precursor of other metabolites is not inhibited when diet DHA is high and dietary ARA is absent. Indeed, animal data support the hypothesis that brain ARA metabolism is altered and inhibited in omega-6 deficiency, which would imply high DHA relative to ARA, albeit confounded by low ARA. The proposal to routinely feed artificial formulas with DHA but without ARA has little support from animal studies designed specifically to test it. Alarmingly, feeding pregnant rats marine oil with high EPA/DHA and some small amount of ARA causes severe depression of ARA, to about half (-50%) of controls, in brain structural lipid in late gestation fetuses and in pups fed from weaning to 7 weeks of age [31]. The direction of such changes can be expected for human newborns, with severity of depression depending on many factors including the overall diet content of marine oil, neonate fatty acid status at birth, and duration of feeding. An artificial formula of unprecedented composition that causes radical changes in composition should not be in widespread use without clear evidence of its long term safety and that it supports infant development similar to breast milk. 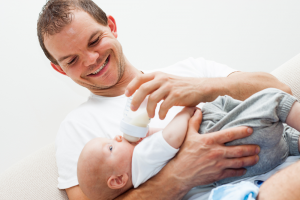 Medically, ARA has long been known as a precursor for potent signaling molecules with diverse chronic and acute actions, such as regulators of inflammation, immune response, blood clotting, and parturition. Indeed, ARA’s effects on heart disease are best known. Legacy drugs such as non-steroidal anti-inflammatory drugs (NSAIDs) such as aspirin, as well as newer blockbusters such as montelukast that enhance breathing in asthmatics, target inhibition of the synthesis or action of ARA products. These functions are thought to require only small amounts of ARA but they necessarily consume it, requiring a continuous supply. The molecular and biochemical processes that control DHA and ARA synthesis are more complex than the net DHA and ARA that are eaten in the diet. Tools of modern biology are revealing how specific fatty acids interact with the molecular mediators and human genetics to modulate particular tissue compositions. Recent detailed genetic data indicates that the relative amounts of LA and ALA vs the LCPUFA drove evolutionary adaptation in humans [32], a result long suspected from now-classic studies [33]. Conclusions Humans are among the most adaptable mammals. Many, and perhaps most, well-nourished infants will thrive and develop apparently normally without a source of preformed DHA and ARA, or with DHA only and provided with sufficient precursor omega-6 PUFA. However, large numbers of infants whose metabolic resilience is compromised due to illness, or whose genetics are tuned to intakes of preformed DHA and ARA, may well require a balance of DHA and ARA for optimal development. The infant nutrition research community has a model for optimal nutrition, human breast milk of well-nourished mothers. Its well-understood composition should be a heavily weighted guide for formulation of breast milk substitutes. Formula with DHA but no ARA is possible only with formulation of manufactured components leading to a fat composition that does not exist in nature. The standard must be clear and convincing evidence compared to the proper standard-of-care, human breastmilk, to move to such a composition. Declaration of Interest. The author accepts research funding from DSM, a maker of ARA for infant formulas. References