Type 2 diabetes (T2D) is a worldwide increasing non-communicable disease characterized by the association with insulin-resistance and defects in insulin secretion. The main factors explaining this increasing prevalence beyond polygenic predisposition are obesity and sedentariness. The basic mechanisms sustaining insulin-resistance (IR) and defects in insulin-secretion are becoming better known. Insulin-resistance relates to the liver, muscle and adipose tissue (AT). Hepatic glucose production is excessive, due to increased gluconeogenesis, and uptake of glucose by muscle – that contributes the most to whole body glucose uptake – and to a lesser degree by AT, is severely impaired at stage of overt diabetes. In addition, the ability of insulin to inhibit lipolysis is also impaired, which contributes to the increased flux of non-esterified fatty acids (NEFAs). This increased flux associated to other factors such as: defect in fatty acid oxidation in muscle because of insufficient physical activity, lower mitochondrial oxidative capacity (in aged people), defect in fat storage into AT because of its defect of expandability (hypertrophy of adipocytes in obese people) lead in fine to ectopic fat storage into muscle, liver and ß cells (1). This ectopic fat storage associated with increased NEFAs flux leads to “lipotoxicity.” 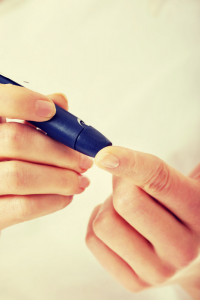 Lipotoxicity is a term that refers to the impairment of insulin-signaling by metabolites of fatty acids (e.g. ceramides, diacylglycerol …). In ß cells (2), these metabolites induce apoptosis of ß cells leading to a progressive reduction of ß cell mass, oxidative stress and endoplasmic reticulum stress, which leads in turn to progressive impairment of insulin-secretion, which can no longer adapt to IR. Lipotoxicity has been advocated also as a possible mechanism leading to non-alcoholic steatohepatitis from liver steatosis in patients with T2D (3). The second major factor that contributes to IR is “glucotoxicity.” Glucotoxicity is a term that refers to both the further impairment of glucose uptake through the decrease in GLUT4 transporters number in muscle and insulinaemic response to glucose by ß cells. It develops progressively when glycaemia increases. Inflammation also participates in IR (4). Besides IR and a defect in ß cell function, the other abnormalities that characterize T2D are a defect of incretin effect (GIP, GLP-1 secretions), increase in glucagon secretion and increased tubular glucose reabsorption.

The great interest in scientific literature towards the potentiality of long chain n-3 polyunsaturated fatty acids (LC n-3 PUFA) to prevent T2D relates to the pioneering epidemiological study of Bang et al. in Eskimos from Greenland, relating high consumption of LC n-3 PUFA to the quasi absence of diabetes in this population (5) and to the experimental work of Storlien et al. showing that fish oil protected rats from high fat diet-induced insulin-resistance (6). Since, a considerable number of studies in rodents and numerous epidemiological studies, randomized control trials (RCTs), meta-analyses and reviews have been carried out. Here, our objective is to summarize as best as possible the conclusions of these studies, to highlight some very recent ones and to try to draw a perspective. We will limit our review to prevention of T2D.

In animal models of dietary-induced IR (i.e. high fat, high fructose or high sucrose diets), it can be concluded that high amounts (non-extrapolatable to human diet or supplementation) of LC n-3 PUFA, mainly given as fish oils, are very efficacious to prevent IR. Although the overall basic mechanisms of this preventive effect remain incompletely understood, many mechanisms have been proven or advocated (reviews in 7-9).

In muscle, LC n-3 PUFA (20% FO substitution into a 60% safflower oil fat diet) completely prevent the decrease in phosphatidyl 3’ kinase activity (a key enzyme of insulin signaling) and the decrease of GLUT4 transporters abundance (10). This effect may be mediated by an alleviation of lipotoxicity inasmuch as many studies have shown that LC n-3 PUFA prevented the increase in triacylglycerol (TAG) in muscle (11). This effect of LC n-3 PUFA could be mediated through adiponectin, which is increased. Adiponectin increases fatty acid oxidation through the activation of AMPK, p38 MAPK and PPAR-α (12). In addition, adiponectin increases glucose transport in muscle and insulin sensitivity (12). It appears that LC n-3 PUFA do not act via PPAR-delta but additional studies are required.

Of importance, Kopecky’s group has shown in mice that LC n-3 PUFA amplified the preventive and reversive effect of thiazolinediones towards insulin-resistance induced by a high fat diet (13-15), which suggests that PPAR-ɣ could be implicated in the effects of LC n-3 PUFA. Indeed, thiazolinediones are ligands of PPAR-ɣ as well as LC n-3 PUFA. In liver of rodents, LC n-3 PUFA prevent IR through many mechanisms such as activation of PPAR-α, which stimulates FA oxidation, suppression of the nuclear abundance of SREBP-1c, ChREBP, and MLX, which depresses de novo lipogenesis and stimulates FA oxidation (16,17), activation of AMPK and alleviation of inflammation and oxidative stress.

In humans, works of Ebbesson’s group in Eskimos from Alaska demonstrated that reintroduction of LC n-3 PUFA (traditional diet) in Westernized Eskimos drastically reduced components of metabolic syndrome and incidence of diabetes (18-20). We observed that 1.8 g/d EPA + DHA given as fish oil decreased the insulinaemic response to oral glucose in healthy subjects (21) and partially prevented the hyperinsulinaemic response during dexamethasone-induced IR in healthy subjects (22). These data strongly suggested the ability of LC n-3 PUFA to increase insulin sensitivity and to at least partially prevent IR induced by a glucocorticoid.

Many meta-analyses have been performed with contradictory conclusions (23-34). It appears that LC n-3 PUFA has a preventive effect towards T2D in Asian populations but may not in Western populations. The contradictory data about a preventive effect of LC n-3 PUFA is likely to be explained by many confounding factors: a) the duration and dose consumed; b) the type of n-3: fish oils, ethyl esters, phospholipids, oily fish; c) the concomitant amount of other fatty acids such as LC n-6 PUFA, which may counteract their effects; d) the counteracting effect of whole diet e.g. Western diet rich in saturated fat, n-6 PUFA, sugars; e) the background consumption of n-3 (from childhood or more recently; f) the genetic background of populations; g) the specific effects of EPA vs. DHA, which may differ or could be antagonistic towards some biochemical pathways.

Meta-analyses are of course useful but their conclusions should not be systematically taken as the truth, especially when their conclusions are different from one meta-analysis to one other. On illustration is the very recently published Finnish Diabetes Prevention Study carried out in 407 overweight patients with glucose intolerance (pre-diabetes) followed over 11 years, which concludes that serum LC n-3 PUFA concentrations at baseline predicted lower T2D incidence (– 28%) (35). The persistent controversy advocates for conducting other well-designed mechanistic studies in human models of reversible induced IR (for evident ethical reasons). The availability of very high concentrates (≥ 90%) of EPA and DHA would also permit the comparison of their potential benefit. The studies in animal models, although not always extrapolative to humans, continue to be required to better define the targets of the effects of LC n-3 PUFA and help to better focus the objectives of human trials. It would also be useful to better delineate in cross-sectional and intervention studies the phenotype of the subjects as well as the environmental factors such as composition of diet, physical activity, degree of overweight, etc.

It is also of interest to note that recommendations of daily amount of LC n-3 PUFA vary between countries and expert panels (see in: 36), which relates to the difficulty of drawing firm conclusions and proposing adequate amounts of LC n-3 PUFA in the specific field of T2D prevention.

In conclusion: animal models are very concordant in demonstrating that LC n-3 PUFA prevent diet-induced IR, although generally a high dose does not extrapolate to humans. They have permitted a better understanding of the basic mechanisms sustaining this preventive effect. Data in humans (mechanistic studies, interventional studies in Alaskan Eskimos, some longitudinal studies in Asian and in Finnish) are also in accordance with these results in animal models. Other studies are negative; one meta-analysis also found an increased risk in US people. LC n-3 PUFA must be considered only as an adjuvant dietary mean to prevent T2D; the best-established means is lifestyle intervention (physical activity plus maintenance of normal weight and prevention of excesses of Western diet).