Many studies have explored the effects of increased intake of n-3 LC-PUFAs on the occurrence and symptoms of allergic disease, especially in infants at high risk of developing atopy. Most research has examined the outcomes of maternal supplementation with these fatty acids during pregnancy. As described in the preceding article, results have generally shown that the overall incidence of allergic disease is not significantly reduced, but symptoms may be delayed and less severe. Reduced sensitization to certain allergens has also been reported. Some studies have reported no significant effects, while others have observed altered immune function, mostly favoring reduced allergic and inflammatory responses. The effect of n-3 LC-PUFA supplementation beginning in the immediate postnatal period has received less scrutiny. Two recent studies examined this type of intervention. Investigators at the University of Western Australia led by Nina D’Vaz and colleagues examined the effects of fish oil supplementation in the first 6 postnatal months in infants at high risk of allergic disease. They focused on the relationship between increased exposure to n-3 LC-PUFAs and the prevention of allergies at 6 and 12 months of age. In a separate report, the investigators analyzed a subset of data from this study to examine the effects of fish oil supplementation on overall immune function. The primary prevention study involved 420 healthy term infants of nonsmoking allergic women who ate little fish. Mothers were considered allergic if they had a positive skin prick test and a history of allergic disease. The offspring were randomized to consume 390 mg of n-3 LC-PUFAs (280 mg DHA and 110 mg EPA) or the equivalent supplement weight of olive oil per day from birth to 6 months of age. The mother provided the fish oil by squirting the encapsulated oil into the infant’s mouth or mixing it with milk. 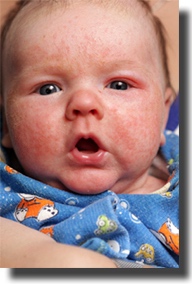 Outcomes included infant red blood cell and plasma phospholipid fatty acid analysis at 6 months of age, breast milk fatty acids at 3 and 6 months and clinical outcomes in the offspring at 6 and 12 months of age. Additional blood measurements included cytokines in mononuclear cells. Diagnosis of allergic disease was determined at 6 and 12 months of age by physician assessment of IgE-mediated food allergy, eczema and respiratory symptoms. Skin prick tests for allergic sensitization were performed at 12 months of age. Nearly all infants (97%) received some breast milk after birth, with 75% receiving breast milk at 6 months of age. Breast milk DHA content was associated with the infants’ red blood cell and plasma DHA concentrations in the fish oil-treated group and was the strongest predictor of the infant’s red cell DHA content. In the total sample, there were no differences in the prevalence of any allergic disease outcomes between the two groups at 12 months of age. However, among the infants who received more than 75% of the intended supplementation, the prevalence of eczema at 12 months was significantly lower. Consistent with this observation, infants who had higher red blood cell EPA or plasma DHA at 6 months of age were significantly less likely to develop eczema by the age of 12 months. There were no differences in any other allergic outcomes. When the analysis was adjusted for sex, paternal allergy, gestation, parity breastfeeding and treatment group these associations were no longer statistically significant. Higher plasma DHA and total n-3 LC-PUFAs were also associated with a significantly lower occurrence of wheeze in the first year of life, which was significant in adjusted analysis. 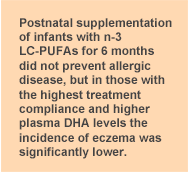 The authors commented that although n-3 LC-PUFA supplementation in early infancy did not prevent allergic disease, the study suggested that supplementation at this age might be of benefit, as the most compliant participants experienced a significant reduction in eczema. As compliance was lower in the fish oil group (57%) compared with the placebo group (65%), as verified by fatty acid analysis, the overall dose in the fish oil-treated group would have been lower than expected. The second report from this study examined cellular immune function in 150 of the 420 infants. The investigators focused on regulatory T cells and cellular cytokine responses to stimulation from house dust mites and mitogen PHA (phytohemaglutinin). They also performed skin prick tests for allergen sensitization. As expected, there were significantly higher n-3 LC-PUFA concentrations in the plasma and red blood cells of the active intervention infants at 6 months. In addition, arachidonic acid (ARA) levels were significantly reduced in red blood cells, but not in plasma. Infants with higher DHA levels had significantly lower Th2 cytokine production (IL-5 and IL-13) in response to beta lactoglobulin allergen stimulation. EPA levels were not associated with any measure of adaptive immunity. Infants with lower plasma DHA or red blood cell EPA levels were also significantly more likely to have eczema at 6 and 12 months of age.