The incidence of asthma has been increasing worldwide and now affects about 193 million individuals globally. In Denmark, the prevalence of asthma doubled from 5.3% to 11.7% over the period from 1986 to 2001. Recognized as a heterogeneous condition, asthma often follows persistent childhood wheeze.  Among the factors related to the development of asthma, are maternal history of asthma, maternal smoking and air pollution, presence of hay fever, eczema, female sex, exercise and more recently, low birthweight. Links to maternal diet in pregnancy, especially dietary fat, have been explored at least since the late 1990s with mixed findings. It has been popular to suggest that dietary changes away from the consumption of n-3 PUFAs toward higher intakes of n-6 PUFAs, specifically linoleic acid, which are frequently pro-inflammatory, have contributed to the rise in asthma. Yet intervention studies to evaluate the effects of maternal PUFA consumption in pregnancy have been inconsistent. Several studies have reported protective effects of higher maternal fish consumption in pregnancy and childhood wheeze or asthma, while others have found no effect. The potential for higher maternal intakes of fish to reduce the risk of childhood asthma is sufficiently compelling to warrant detailed studies with strong design. This report analyzes data from the Danish National Birth Cohort, a very large observational study on early life factors and the risk of disease in later life. Of the 101,045 participants originally enrolled, the investigators limited their analysis to the first enrolled pregnancy of women with a singleton birth who did not take fish oil during pregnancy and for whom fish intake data were available. The total number of participants was 28,936. Fish consumption was determined from 2 interviews during pregnancy and the frequency divided into 5 categories: never, monthly or less, weekly, weekly with low frequency and weekly with high frequency, i.e., hot meals or sandwiches more than 5 times per week. 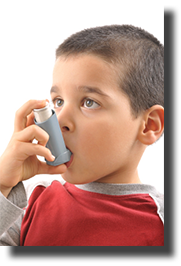 The occurrence of asthma at 18 months of age, as reported by the parent, was defined as a doctor diagnosis, with wheeze considered as wheezing or whistling in the chest. Asthma at age 7 was based on standardized questions, with current asthma being a positive response to ever having a doctor-diagnosis of asthma and wheezing symptoms in the past 12 months. The investigators also collected all hospital admissions for asthma, emergency room treatments and outpatient contacts from the Danish National Patient Registry. They used the Register of Medical Product Statistics to determine the number of asthma prescription drugs that had been filled. The investigators noted significant differences in fish consumption with age, with younger mothers less likely to eat fish. Thus, analyses were adjusted for maternal age. Only 5% of women reported eating no fish. The odds ratios for asthma were adjusted only for socioeconomic variables. Interestingly, breastfeeding accounted for the largest reduction in risk of asthma. Because of missing outcome data, 7,643 participants were excluded from the analysis at 18 months of age. Asthma occurred in 17 percent of children at 18 months of age and wheeze in 27%. Multivariate analysis of asthma and wheeze at 18 months of age showed that never eating fish during pregnancy was associated with a 30 percent greater risk of childhood asthma compared with eating fish several times per week (OR = 1.30, 95% CI, 1.05 – 1.63, P = 0.02). Wheeze was not associated with maternal fish consumption. 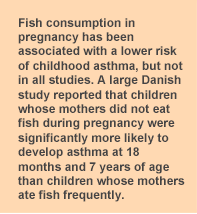 At the age of 7, asthma was present in 6 percent of children as defined above and 31 percent according to hospital admission and prescription data. About 4 percent of children were considered to have current asthma. As at the earlier age, children whose mothers never ate fish during pregnancy were more likely to have an asthma diagnosis by hospital admission (OR – 1.46, 95% CI, 0.99 – 2.13, P = 0.05). The relationship for current asthma was in the same direction but did not reach statistical significance. This study documented a significant relationship between higher consumption of fish during pregnancy and a lower risk of doctor-diagnosed asthma at 18 months and 7 years of age, about the time that asthma peaks. Maternal fish consumption was not associated with childhood wheeze or allergic rhinitis. The associations between asthma and maternal fish consumption were significant when doctor-diagnosis, hospital admission or prescription asthma medicine were assessed, but not for self-reported asthma. Another interesting finding was the protective effect of longer breastfeeding, i.e., for 7 to 9 months or longer. Women who breastfed longer were more likely to consume fish frequently, but the two factors were only modestly correlated. The investigators found no association between childhood asthma and dietary n-3 PUFA intakes based on food frequency questionnaire data, nor with early childhood fish consumption. This study supports other reports in which higher fish consumption in pregnancy was associated with a lower risk of childhood asthma.   Maslova E, Strøm M, Oken E, Campos H, Lange C, Gold D, Olsen SF. Fish intake during pregnancy and the risk of child asthma and allergic rhinitis - longitudinal evidence from the Danish National Birth Cohort. Br J Nutr 2013; Mar 8:1-13. [PubMed]