Stepping Stones to Treating Alzheimer’s Disease: Is Insulin the Key? 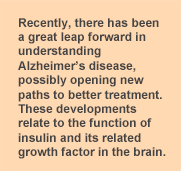 Descriptions of Alzheimer’s disease, a progressive degenerative condition that robs its victims of their memory, cognitive function, language and ability to take care of themselves, centers on the accumulation of abnormal proteins amyloid-beta and tau. Amyloid-beta proteins form plaques outside the cell, while tau builds up inside the cell to form neurofibrillary tangles (Figure 1). It remains uncertain whether these abnormalities are a cause or consequence of the disease. Neither do we know what causes Alzheimer’s disease, nor can we cure it. Recently, however, there has been a great leap forward in understanding the disease and possibly opening new paths to better treatment. It has been known for some time that receptors for the hormone insulin and its various growth factors are scattered throughout the brain and are concentrated in the hippocampus a center for learning and memory. Further, increasing the insulin in the brain via direct injection or inhalation through the nose improves memory and recall in animals and improves verbal memory in healthy young men. 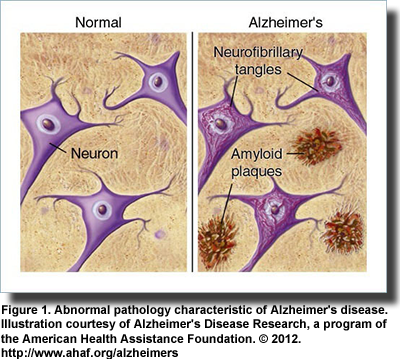 Observational studies also established links between insulin resistance, impaired cognition and reduced glucose uptake (glucose is the brain’s primary fuel) in patients with type 2 diabetes and those with Alzheimer’s disease. Investigators recognized the parallels between these two diseases noting that both conditions entail impaired glucose metabolism, abnormal blood vessel function, insulin deficiency and insulin resistance and the formation of abnormal amyloid proteins. In addition, type 2 diabetes increases the risk of developing impaired cognition and Alzheimer’s disease, yet ironically, diabetic patients treated with insulin are less likely to develop Alzheimer’s  pathology. These similarities led Eric Steen and colleagues at Brown Medical School, USA, to propose the term “type 3 diabetes” to describe the type of diabetes that selectively affects the brain. They noted that abnormalities in insulin and insulin-like growth factor activities in patients with Alzheimer’s disease were associated with the reduced expression of genes for these proteins, their cellular receptors and the signaling enzymes that carry out the actions initiated by insulin. On the other hand, the expression of genes for the amyloid precursor protein, which gives rise to the abnormal amyloid-beta peptides, and the gene for the major tau enzyme was increased. As Alzheimer’s disease progresses, insulin signaling declines further and the abnormal amyloid-beta peptides accumulate. It turns out that insulin signaling—those activities dependent upon insulin and insulin-like growth factor—is the key to the production of the abnormal amyloid-beta peptides. 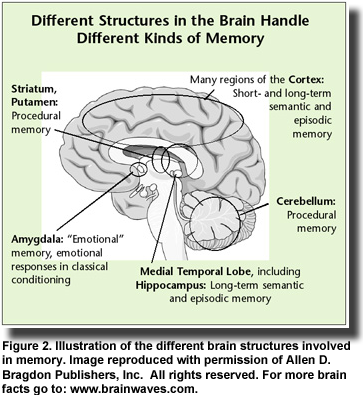 Insulin resistance in the brain can occur with or without diabetes or insulin resistance in the rest of the body. This observation accounts for the fact that Alzheimer’s disease can develop in individuals who have no symptoms of diabetes. However, once insulin resistance develops in the brain and abnormal amyloid-beta peptides begin to accumulate, the clinical symptoms of impaired memory and cognition appear. Memory loss develops because the amyloid-beta peptides bind specifically to neurons in the hippocampus and other regions of the brain that function in memory processes (Figure 2). This binding contributes to neuronal 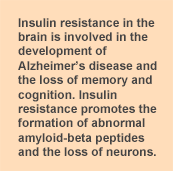 destruction. Impaired insulin function is also involved in the activation of the tau protein, which forms the neurofibrillary tangles, another characteristic of Alzheimer’s pathology. Several key studies confirmed the involvement of insulin in the development of Alzheimer’s disease. One was the demonstration that insulin can stem the loss of hippocampal neurons that is associated with amyloid-beta peptides. Another study showed that impaired insulin signaling in the central nervous system increased the loss of brain tissue associated with Alzheimer’s disease. Third, the administration of intravenous insulin in patients with Alzheimer’s dementia led to striking improvements in memory. Other observations in diabetic patients treated with insulin, such as improved memory, lower density of lesions and slower progression of Alzheimer’s disease, reinforced the idea that insulin treatment might be effective in early Alzheimer’s disease or mild cognitive impairment.

As insulin infusion is not an appropriate long-term therapy and risks excessively low blood sugar and other endocrine derangements, researchers turned to intranasal insulin treatment. This way of delivering insulin provides the most direct route to the brain. In patients with mild cognitive impairment, intranasal insulin treatment was associated with greatly improved memory. Another study in adults with mildly impaired cognition or early Alzheimer’s disease reported that 4 months of intranasal insulin treatment preserved general cognition and improved the metabolic integrity of the brain as revealed by PET scan. Two recent studies now open the doors to more effective treatment of early Alzheimer’s disease and mildly impaired cognition. The first report examined enzymes in the insulin signaling pathway in the brains of individuals who died with or without Alzheimer’s disease. The investigators firmly established the presence of insulin and insulin-like growth factor resistance in the brains of Alzheimer’s patients who did not have diabetes. They reported increased levels of markers of insulin resistance in the hippocampus of individuals with mild cognitive impairment and in the cortex of those with advanced Alzheimer’s disease. The cortex is affected only late in Alzheimer’s dementia. These findings and others in the report established that insulin resistance and impaired insulin signaling are definitive characteristics of preclinical and established Alzheimer’s disease. 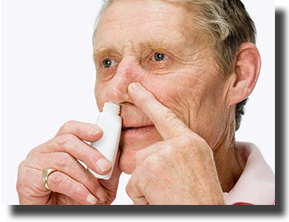 mer’s disease. As Alzheimer’s disease develops, amyloid-beta peptides activate a potent mediator of inflammation that leads to insulin resistance. The researches showed that by blocking the inflammatory mediator with a drug, they could protect neurons from the damage caused by amyloid-beta peptides. When they enhanced insulin signaling using a different drug, they were able to reverse the pathology associated with insulin resistance and improved cognition in the animals. These studies demonstrated the importance of inflammation and the insulin signaling pathway in the development of Alzheimer’s disease and suggest different strategies to treat the disease in its early stages, each targeting an aspect of insulin resistance. Where do polyunsaturated fatty acids such as seafood omega-3s fit into this picture? Higher intakes of seafood omega-3s are associated with lower levels of the harmful amyloid-beta42 peptide in healthy older adults, as described earlier in this issue. DHA affects the processing of the amyloid precursor protein, which gives rise to the abnormal amyloid-beta peptides. It appears to direct the process toward less harmful peptides. DHA is also the precursor of neuroprotectin D1, a substance that promotes cell survival, protects neurons, reduces oxidative stress and slows the progression of neurodegenerative disease. DHA and neuroprotectin D1 also reduce inflammation. Individuals with higher intakes of EPA and DHA have greater gray matter volume in the brain and higher cognitive and behavioral scores. Moreover, several observational studies have reported that those with higher seafood intakes or greater seafood omega-3s are less likely to develop Alzheimer’s disease. Although seafood omega-3s may have only modest effects on disease symptoms and cognition, the value of adequate omega-3 intakes may be greatest in reducing the risk of these conditions in the first place.