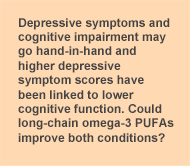 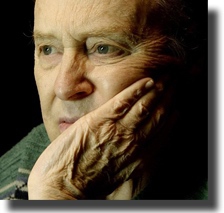 Some evidence suggests that supplementation with n-3 LC-PUFAs in very mild cognitive impairment slows the rate of decline or improves cognitive scores. A multi-center study in the U.S. reported that supplementation with 900 mg of DHA/day was associated with improved learning and memory function in adults whose cognitive performance had declined. Supplementation with n-3 LC-PUFAs in individuals with mild to moderate depressive symptoms was associated with improved symptoms in elderly participants. Building on this evidence base, Natalie Parletta (Sinn) and colleagues at the University of South Australia examined the effects of 6-month supplementation with high-EPA or high-DHA fish oils or high-linoleic acid vegetable oil on depressive symptoms, memory, executive function and quality of life in adults 65 years of age or more with mild cognitive impairment. Participation in the study required a Mini-Mental State Examination score of ≤ 22 (≤ 20 indicates possible dementia), a score on the Verbal Paired Associates Task ≥ 1.5 SD below the population mean, and/or age and education-adjusted DemTect scores between 9 and 12, suggesting mild cognitive impairment. Qualified participants maintained normal daily functioning, but had self-reported memory loss. They were also given the Geriatric Depression Scale assessment at enrolment. Fifty volunteers were recruited, of whom 40 completed the 6-month assessments. On average, the participants were 74 years of age. The supplements provided 1.67 g of EPA plus 0.16 g of DHA or 1.55 g of DHA plus 0.40 g of EPA or 2.2 g of LA in 4 capsules per day. The investigators administered a battery of health and cognitive assessments aimed at evaluating the effects of EPA or DHA treatment on depression and quality of life, memory, executive function and working memory. They identified 6 potential confounding variables and measured fatty acid profiles in erythrocytes. All assessments were conducted at baseline and after 6 months. The major finding was significantly improved depression scores in participants consuming either the high-DHA or high-EPA s 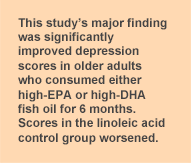 upplements compared with the placebo group (Table) whose scores actually worsened over the 6-month period. The changes in the control group were significantly different from the treatment groups. EPA has been considered more effective in alleviating depressive symptoms than DHA in most studies, with one short-term study in a small number of patients reporting no significant effect of DHA alone. However, direct comparisons between the two n-3 LC-PUFAs are lacking. This comparison of the DHA- and EPA-enriched supplements suggests that DHA was also effective in improving the scores for depressive symptoms in these older adults. 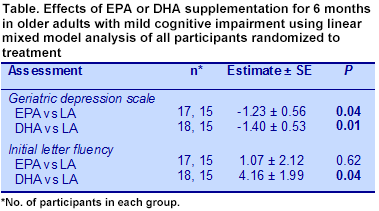 There was also as significant improvement in the initial letter fluency scores for DHA-enriched supplementation compared with linoleic acid, but not for EPA-enriched supplement. Overall, 6-month supplementation with either EPA or DHA had minimal effects on cognitive scores after extensive testing. The investigators suggested that perhaps the participants’ initial n-3 LC-PUFA status (5% EPA + DHA in erythrocytes) was above the concentration where effects of supplementation could be observed. The study also had small numbers in each group, which limited its power. These observations and the diverse array of evaluations administered suggest that n-3 LC-PUFA supplementation in the presence of high intakes of linoleic acid may not improve cognition in older adults with mild cognitive impairment. Whether there would be effects in diets low in linoleic acid is an unanswered question. Sinn N, Milte CM, Street SJ, Buckley JD, Coates AM, Petkov J, Howe PRC. Effects of n-3 fatty acids, EPA v. DHA, on depressive symptoms, quality of life, memory and executive function in older adults with mild cognitive impairment: a 6-month randomised controlled trial. Br J Nutr 2012;107:1682-1693. [PubMed]