Posted by pufa | September 30, 2016
Immune Function, Clinical Conditions
This article at a glance   Colorectal cancer, or cancer of the colon or rectum, is among the most frequently-occurring types of cancer in Western society. The age-adjusted annual incidence rate of colorectal cancer in US men and women is on the order of 45 and 35 cases per 100.000 persons (2013), respectively. Death rates are approximately 10-15 cases per 100.000 persons per year. Both incidence and mortality rates are slowly decreasing. However, on a global scale, and in many countries undergoing marked economic development in particular, colorectal cancer incidence is increasing and is expected to continue to increase dramatically. Timely and periodic screening using one of several available methods is important to detect colorectal cancer early on, but only a fraction of the people who most benefit from screening (i.e. over 50 years) undergo this procedure. Survival from colorectal cancer that is detected and treated early is high. Treatments for colorectal cancer depend on the stage of tumor development, and generally encompass tumor excision, tissue resection, radiofrequency ablation, cryotherapy, chemotherapy, radiation therapy and targeted therapies using monoclonal therapeutic antibodies. A healthy lifestyle and diet can significantly reduce the risk for developing colorectal cancer.

Colorectal cancer is a relatively well-studied type of cancer and much is known about the sequence of molecular events occurring in the multistep progression of a normal intestinal cell to a tumor. A characteristic of both familial and sporadic colorectal cancer is the early loss of a functional gene coding for enzymes responsible for repairing DNA mismatches that occur during DNA replication (i.e. during cell division). Mismatch repair defects lead to so-called microsatellite instability, which is the appearance of alternative transcripts of short nucleotide repeats (microsatellites) found across the genome. Microsatellite instability corresponds to a so-called mutator phenotype, in which spontaneously occurring mutations are not repaired. Normal DNA replication has a very low error rate, and DNA repair enzymes restore any incorrectly incorporated bases, resulting in replication errors at a frequency of an estimated 1 out of every 10 billion newly incorporated nucleotides. This very low mutation rate is increased significantly, perhaps ~100-fold, if repair enzymes are inactive or absent, as frequently seen in the development of colorectal cancer. Malignant cells typically exhibit thousands of nucleotide sequence alterations, and numerous chromosomal abnormalities. The loss of one of several known mismatch repair genes leads to a variety of mutations such as nucleotide transitions, transversions, and 1-4 base pair deletions and insertions. A higher than normal rate of mutation significantly increases the possibility that oncogenes become activated, and/or lead to the inactivation of tumor suppressor genes, driving the process of tumor development further. 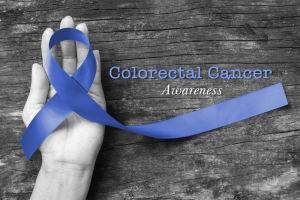 Microsatellite instability is observed in some 15% of sporadic colon tumors. In hereditary forms of colon cancer, which may make up 25% of colon cancers, several mismatch repair genes are known to be mutated in germ cells and predispose to the development of mismatch repair defects. It is believed that inactivation of both alleles of a mismatch repair gene is necessary to observe a mismatch repair defect. Spontaneous mutation in the remaining functional gene copy (loss of heterozygosity) can occur comparatively frequently in colonic tissue compared to other tissues because the colon epithelium has a high rate of cell division and is relatively large. Epigenetic modulation of mismatch repair gene expression can also occur, and has been related to chronic inflammation. According to the number of microsatellite markers that are observed, a classification can be made for tumors that are microsatellite-stable, have low-frequency microsatellite instability, and those that have high-frequency microsatellite instability. Both hereditary and sporadic forms of colorectal cancer can have a high level of microsatellite instability, are predominantly located in the proximal colon, and contain tumor-infiltrating lymphocytes. In addition to the intricate genetic abnormalities that occur in the carcinogenic process, the immunobiology of cancer is another fascinating aspect of their development. Tumors circumvent parts of the immune system that normally control aberrant cell development and proliferation, which may result from the selection of the ability to co-opt the activity of specific immune cells to suppress their elimination. T regulatory lymphocytes (Treg), an important subpopulation of T cells that execute an immune-suppressive function in the immune system, have long been recognized to play a crucial role in tumor-driven immune modulation. Treg precursor cells are actively recruited into tumors and may further differentiate there to attain an immuno-

suppressive phenotype. In colorectal cancer, Tregs suppress an anti-tumor response through the formation of arachidonic acid-derived prostaglandin E2 by cyclooxygenase-2, thereby facilitating tumor growth. The involvement of polyunsaturated fatty acids is furthermore noteworthy since evidence shows that long-chain omega-3 PUFA (omega-3 LCPUFA) can reduce the risk for the development of colorectal cancer, as well as serve a positive role in its treatment. Research on the chemopreventive and chemotherapeutic activities of omega-3 LCPUFA intake in colorectal cancer development has made a noteworthy transition into clinical research in recent years. In 2015, Song and colleagues at the Department of Nutrition, Harvard School of Public Health, together with colleagues from the Dana-Farber Cancer Institute, the departments of Medicine and Pathology at Brigham & Women’s Hospital, the Massachusetts General Hospital, all in Boston, MA, and the National Cancer Institute at the National Institutes of Health, Bethesda, MD, unveiled a remarkable association between higher dietary omega-3 LCPUFA intake and a lower risk of colorectal tumors with genome instability. This association was not seen for colorectal cancer in general, or for microsatellite-stable colorectal tumors. The results were obtained from two large prospective cohort studies, the Nurses’ Health Study and the Health Professionals Follow-up Study. From a total of 173,230 study participants, tumor tissue was available for microsatellite marker analysis from 1125 of the 2501 cases of colorectal cancer. In both studies, periodic assessments of dietary intake have been made over several decades using validated food frequency questionnaires (baseline for the first study is 1976, and for the latter 1986). Marine omega-3 intake was calculated as a cumulative average intake of EPA, DHA and DPA (ω-3) up to the end of follow-up (year 2010, participant death, loss to follow-up, or colorectal cancer diagnosis). In order to combine the data from both cohort studies, the researchers first assessed that no significant heterogeneity existed between the two cohorts in the relationship between omega-3 intake and colorectal cancer incidence. In men, but not women, a significant trend towards lower colorectal cancer incidence was observed. Data from both cohorts were pooled and proportional hazard analysis was performed after taking into account the competing risks that the different tumor types impart on the survival of study participants. The relative risk (age-adjusted) for developing the high microsatellite instability colorectal tumor type was nearly half in people with an omega-3 intake of at least 300 mg/d omega-3 LCPUFA compared to people with an intake below 100 mg/d, and found to be insensitive to correction for potential covariates that may affect tumor development (family history,

endoscopy, physical activity, multivitamin intake, aspirin intake, alcohol consumption and a dedicated healthy diet to lower hypertension). The association between high omega-3 intake and reduced high microsatellite instable tumors was linear and statistically significantly different from the model where no differentiation of tumor types was made. The results suggested that moderate dietary omega-3 intake in recommended daily doses may be associated with a very marked effect size, i.e. reduction in the risk of developing colorectal tumors with a mutator phenotype in adults followed over periods of 25-35 years. In order to gain further insight into this potential chemopreventive effect of omega-3 LCPUFA intake on the development of genome-instable tumors, the same researchers recently assessed whether this potential modulatory effect may also be related to the immunological phenotype of colorectal tumors. Using pooled data on mortality, dietary assessments, and tumor specimens from the same large prospective cohort studies, Song and colleagues addressed the a priori hypothesis that omega-3 LCPUFA intake may be associated with colorectal cancer tumor subtypes characterized by specific immune infiltrates, in particular with lymphocyte populations. A similar data pooling and statistical analytical approach was followed. Among 125,172 evaluated study participants, there were 2504 colorectal cancer cases. Of these, an evaluation of T-lymphocyte populations in colorectal tumors could be made for 614 cases. Analyses of tumor incidence were made after stratification of study participants by intake of omega-3 LCPUFA (less than 0.15 g/d, 015-0.24 g/d, 0.25-0.34 g/d and >0.35 g/d). Variables that changed in both men (Health Professionals Follow-up Study) and women (Nurses’ Health Study) with increased omega-3 intake were higher physical activity, undergoing endoscopy, multivitamin use, following a healthy diet, and fewer current smokers. Lymphocyte populations were characterized by immunohistochemistry for the following immune markers using tissue microarray analysis: CD3+ (invariant chain of T-cell receptors expressed on all T-cells), CD8+ (expressed in cytotoxic and suppressor T-cells), CD45RO+ (an isoform of CD45, expressed in activated and memory T-cells), and FOXP3+ (a key transcription factor that is relatively specific for Tregs).

Trends towards a significantly decreased incidence of colorectal cancer with increased omega-3 LCPUFA intake were observed specifically for tumors with a high density of FOXP3+ Tregs (P<0.001). The P-value cut-off for statistical significance had been reduced to 0.012 to correct for multiple hypothesis testing, and a potential association with low-density CD3+ tumors was not considered of relevance (P=0.05 after adjusting for the various mentioned covariates). High intake of omega-3 LCPUFA (≥ 350 mg/d) was associated with a 43% lower incidence of high Treg density tumors, but not with low-density tumors. The association between intake of either EPA, DHA or DPA ω-3 and Treg-infiltrated tumors was significant as well. The relationship between decreasing incidence of Treg-dense tumors and omega-3 LCPUFA intake (as mean values for each group) was found to be linear. Microsatellite-instable tumors contained higher densities of Tregs than microsatellite stable tumors, but a clear dose-dependent relationship between omega-3 intake and Treg-dense tumors according to genome stability proved difficult to establish and the number of cases for each combination was small. The authors next assessed if Treg cells isolated from the colon of mice were affected in their ability to modulate the effector function of CD4+ T-cells by exposure to omega-3 LCPUFA. Murine Treg cells were exposed for 4 h to varying concentrations of DHA (the free fatty acid form) in a cell culture medium containing bovine serum albumin. Thereafter the cells were washed and co-incubated with the effector T-cells for two days, and their proliferation in response to T-cell receptor stimulation was quantified. In the presence of Treg cells, CD4+ T-cell proliferation was markedly suppressed, as expected. Pre-exposure to DHA inhibited the immunomodulatory function of the Tregs in a concentration-dependent manner, with T-cell proliferation doubling when Treg cells had been exposed to concentrations of DHA of 50 micromolar or higher. This result is in accordance with the immune modulatory effect observed in the cohort studies. The possibility that high concentrations of free fatty acids may be present as micelles in the culture medium was not addressed (and no defatted albumin was indicated to have been employed), thereby leaving open the possibility that the observed effect may be due to a detergent effect that may have compromised Treg cell function or viability.

The insight obtained from these two studies has been recently further expanded by the first assessment of survival of patients with a diagnosis of colorectal cancer in relation to their omega-3 LCPUFA intake after diagnosis. The results are again drawn from the Nurses` Health and Health Professionals Follow-up Study using the dietary intake assessment of the first food frequency questionaire at least one year after diagnosis. The postdiagnostic intake was compared to the last assessment taken prior to diagnosis to assess any changes in omega-3 LCUFA intake that may have occurred. Deaths from colorectal cancer were identified from the National Death Index, and review of medical records. 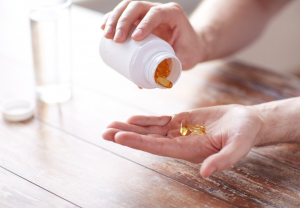 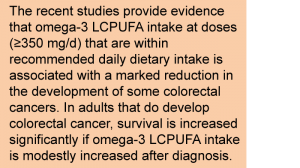