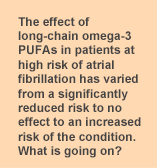 Atrial fibrillation is a type of arrhythmia that results from disorganized electrical signals in the upper chambers of the heart (atria). Instead of beating rhythmically, the atria quiver, allowing blood to pool. As a result, insufficient blood reaches the lower chambers, which pump the blood throughout the body. Atrial fibrillation may occur occasionally or become a long-term recurring condition. Those who have experienced atrial fibrillation face increased risk of stroke, heart failure and recurrence as a complication of cardiac surgery. The development of postoperative atrial fibrillation significantly increases the risk of in-hospital and long-term mortality, stroke and longer hospital stays making its prevention a high priority in cardiac surgery. The effects of long-chain omega-3 PUFAs (n-3 LC-PUFAs) on the risk of developing postoperative atrial fibrillation have been investigated in many studies of patients undergoing different types of cardiac surgery with highly inconsistent results. Some studies reported a significant reduction in the risk of postoperative atrial fibrillation and others have found no benefit. There are also observational reports of greater risk of atrial fibrillation with higher serum levels of EPA and DHA, particularly of EPA, in Japanese patients and in those consuming more than 4 servings of dark fish per week in the Framingham study. Reasons for these disparities are not obvious, beyond differences in patient populations, dose of n-3 LC-PUFAs and duration of the supplementation prior to surgery. It is common to initiate supplementation only 2 to 5 days prior to surgery. However, maximum incorporation of EPA and DHA into myocardial phospholipids may take about 3 weeks for DHA and 6 weeks for EPA. This suggests there may be considerable overlap in the tissue levels between treated and control patients. 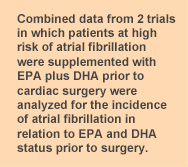 With these considerations in mind, Robert Metcalf and colleagues at the Royal Adelaide Hospital, Australia and the University of Iceland in Reykjavik, examined the relationships between red blood cell phospholipid EPA and DHA concentrations in patients with no history of atrial fibrillation and the risk of postoperative atrial fibrillation or flutter during the first 6 days after cardiac surgery. This period represents the greatest risk of atrial fibrillation. They combined and analyzed data from 2 randomized clinical trials, one conducted in Adelaide, the other in Reykjavik. In both trials, patients were supplemented with EPA plus DHA prior to surgery. The Australia trial included patients 18 years or older and the Iceland study restricted participants to those >40 years of age. Patients in Australia with previous atrial fibrillation, currently taking anti-arrhythmic drugs, consuming fish oil supplements or eating fish more than once a week were excluded. Supplements provided 2.2 and 4.5 g/day of EPA plus DHA in Reykjavik and Australia, respectively. The investigators focused on n-3 LC-PUFA status in red blood cells at the time of surgery, not the duration of treatment. Statistical analyses were adjusted for study site, age, surgical procedure (coronary artery bypass graft alone or with valve surgery), BMI, diabetes and statin use. The analysis included 355 patients. 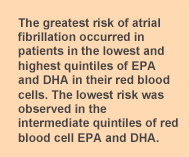 Atrial fibrillation occurred in 160 (45%) patients and was more frequent in those who were older, had had valve surgery and had a lower BMI. Multivariate analyses considering EPA and DHA concentrations as continuous variables showed no significant relationships with risk of atrial fibrillation. In comparing quintiles of red blood cell EPA and DHA with risk of atrial fibrillation, EPA bore no significant relationship to risk, whether comparing the highest quintile with the lowest, or with the quintile having the lowest risk, which was either the second or fourth quintile. In contrast, risk of atrial fibrillation was more than 2 times greater in patients with the highest or the lowest levels of red blood cell phospholipid DHA, regardless of whether the comparison was based on the first quintile or the quintile with the lowest risk (Table). The data also showed that the pattern of risk with DHA level was U-shaped, with risk greatest for the lowest and highest quintiles and non-significant risks for the second and third quintiles.

When the risk of atrial fibrillation was determined using the sum of red blood cell EPA and DHA, the pattern was similarly U-shaped, with greater risk of the condition at either the lowest or highest concentrations of EPA + DHA. The risk for EPA + DHA was significantly greater in the analysis using the fourth quintile as the reference, OR for Q5 = 2.36 (95% CI, 1.15-4.85). The investigators also looked for a possible association with red blood cell arachidonic acid, but found no relationship with risk in any multivariate analysis. A recent Danish study also reported that the risk of incident atrial fibrillation followed a U-shaped pattern in association with dietary n-3 LC-PUFAs from marine fish. Rix and colleagues at the Aalborg University Hospital, Denmark, examined incident atrial fibrillation or flutter in adults aged 50 to 64 years of age who were free of cancer and living in the urban area of Copenhagen and Aarhus. A total of 57,053 persons were enrolled and monitored for a median of 13.6 years. There were 3,284 participants who experienced atrial fibrillation. Participants’ consumption of different fish was estimated from a semi-quantitative food frequency questionnaire at baseline. Atrial fibrillation or flutter occurred with twice the frequency in men as women, 6.5 per 1000 person-years vs. 3.2 per 1000 person-years in men and women, respectively. The median consumption of n-3 LC-PUFAs was 630 mg/day, about 6 times as much as consumed in the U.S. In adjusted analysis, the lowest risk of atrial fibrillation was observed in the third quintile of total n-3 LC-PUFA consumption (HR – 0.87 (95% CI, 0.78-0.98), with the greatest risks of approximately 1 observed in Q1 and Q5. Similar results were reported for EPA and DHA. 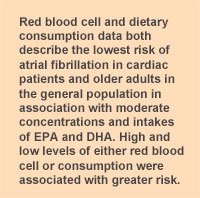